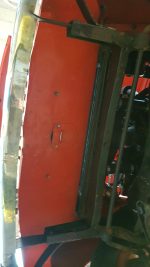 This Ford Vedette has the very rare option of an electric gearbox by Cotal. This was a very expensive option which cost one third of the new price of the whole car. This particlar Ford was bought by Mr Andre Weber from Herblay, FRANCE on the third of Octobre 1978 from Mr.Jean-Pierre Baretaud from Courbevoie, France. On the 9th of Octobre 2016 this car was sold on a public auction by Artcurial. I bought this car because I am addicted to the mark Delahaye 135M wich almost all have a Cotal gearbox mounted. Mr. Weber has restored the car completely during his ownership and has transformed the car from a coach into a convertible. During this restoration the body was seperated from the chassis to do a good job. In December 2017 the car was checked and registered bij the Dutch RDW for a licence in The Netherlands.